Have you ever landed a fish you've never caught before then sat there staring at in the net wondering how you're supposed to lift it up for the picture, or even how to release it?

WHY IS THERE A PROPER WAY TO HOLD FISH?

Holding a fish properly isn't just for the benefit of the fish, it also keeps the angler safe. All fish, toothless or not, have defence mechanisms built-in. Whether its a bass with an effectively sharp dorsal fin, or walleye, pike, and muskie with their teeth, all fish can pose a threat to you as the angler. But–– with proper holds there is little to no concern in handling them for a photo, releasing them, or even putting them into the live well if you're planning on keeping them. 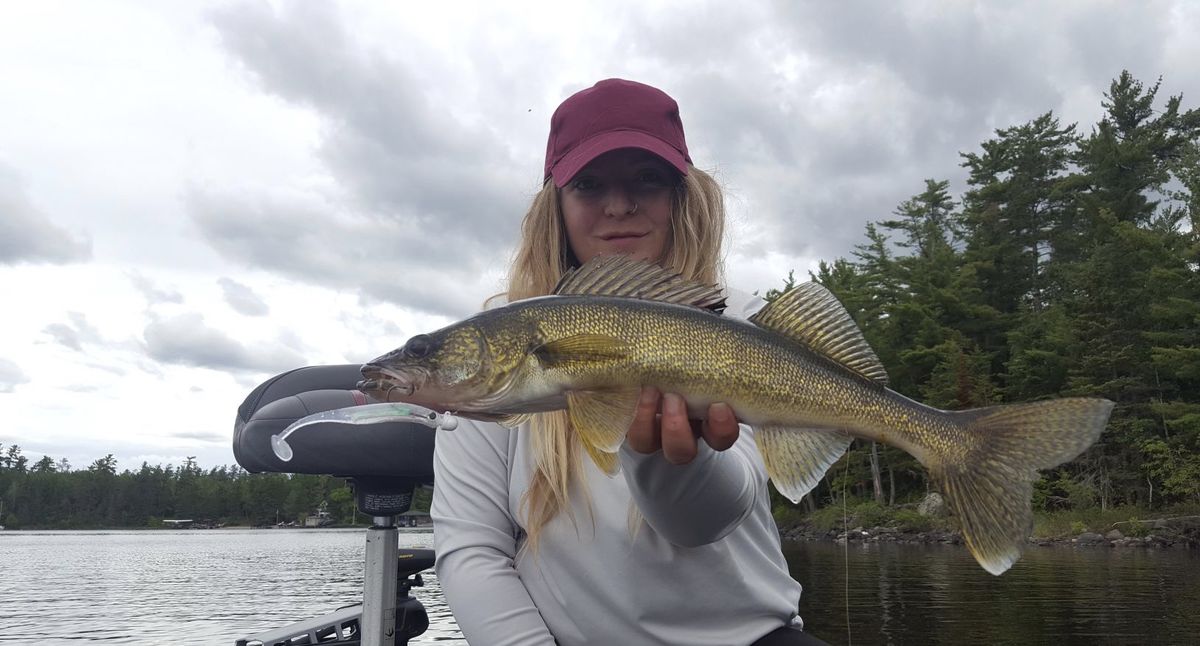 Times have changed, and our education towards fishing as our resource has also changed. With the growing recognition of CPR (Catch, Photo, and Release) lodge owners are embracing it. Some lodges won't even post photos of fish being held improperly, so your trophy fish may not be shared or celebrated as it should be!

The reason lodges and fishing pages don't post improper holds in photos is that in order for CPR to be successful, fish handling has to be done properly.

Learning how to hold fish is certainly better done with hands-on practice. But this article will give you the bare-bones, easy to remember approach on handling each fish species that dwell in Sunset Country's waters! To read more about why, scroll to the bottom of the article!

By using pliers you can keep your bare hands free of the hooks and any hazards on the fish, ie, prickly spines. Once you've successfully unhooked the fish, take the lure out of the net, taking the time to secure it back onto the rod will keep the workspace even safer. So long as the fishes head is underwater in the net, you can remove rushing from the picture, that's how mistakes are made.

Once you have hooks clear of the net and away from where you'll be posing, get the camera out before you even think about lifting the fish out of the water. This way you're all set for a couple of photos, and a seamless release– which you can capture on camera too!

HOW TO HOLD DIFFERENT SPECIES

Not all fish were created equally which means you'll hold some of them differently than others. Don't let this discourage you, all holds are simple and effective.

Both bass species are one of the few you won't get much flack for holding vertically. They are also one of the easiest to hold because they can be "lipped," or held directly from the mouth.

Like all larger fish of each species though, some extra care is required for heavier ones and the fish certainly won't complain about having some extra help staying healthy.

Here are a couple of hold examples for bass:

This vertical hold is perfectly safe for this bass. They aren't cranking its jaw and forcing the head to hold the body on an angle, it's just straight up and down. This hold is also acceptable for crappie, largemouth bass, perch and other small panfish like sunfish. 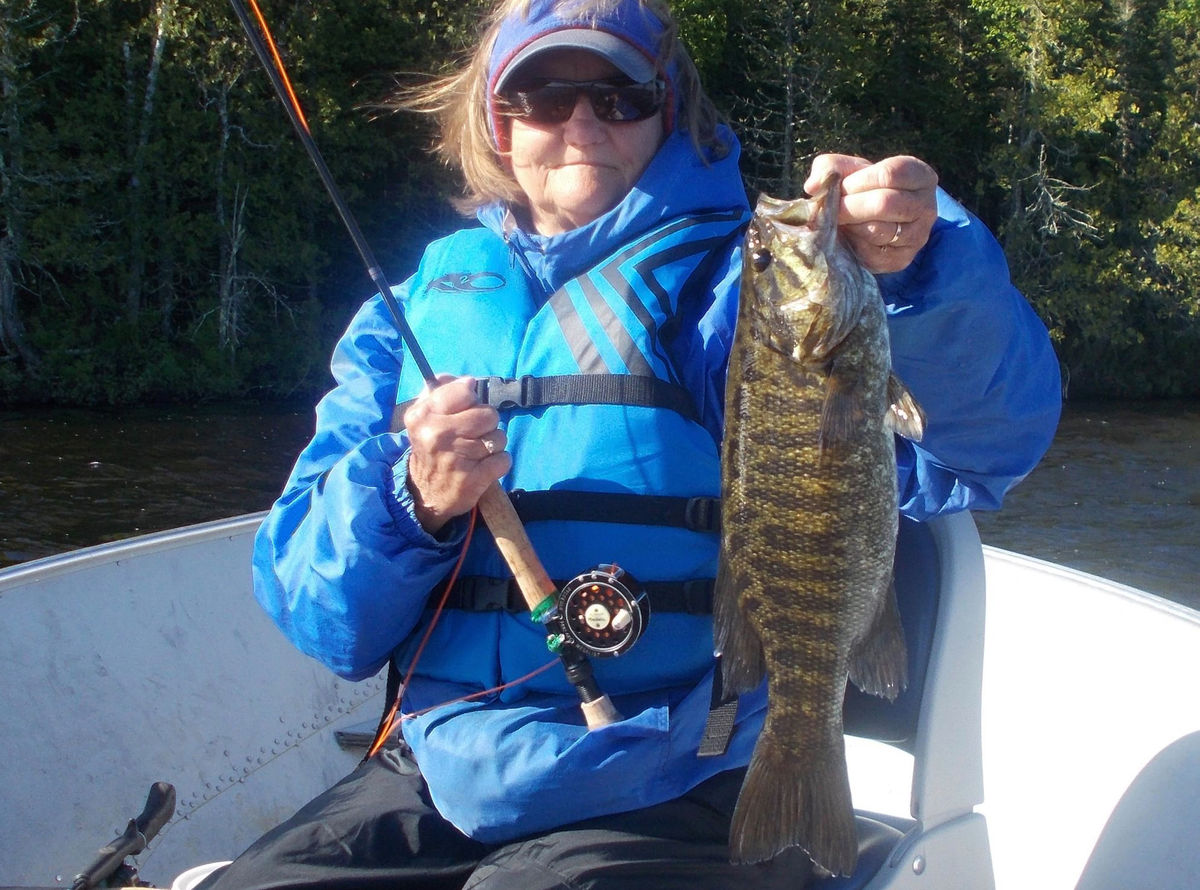 The horizontal hold below is an excellent example of how to support a larger bass, crappie, or even perch. It also adds a different angle and makes it easier to take horizontal photos, instead of only verticals! 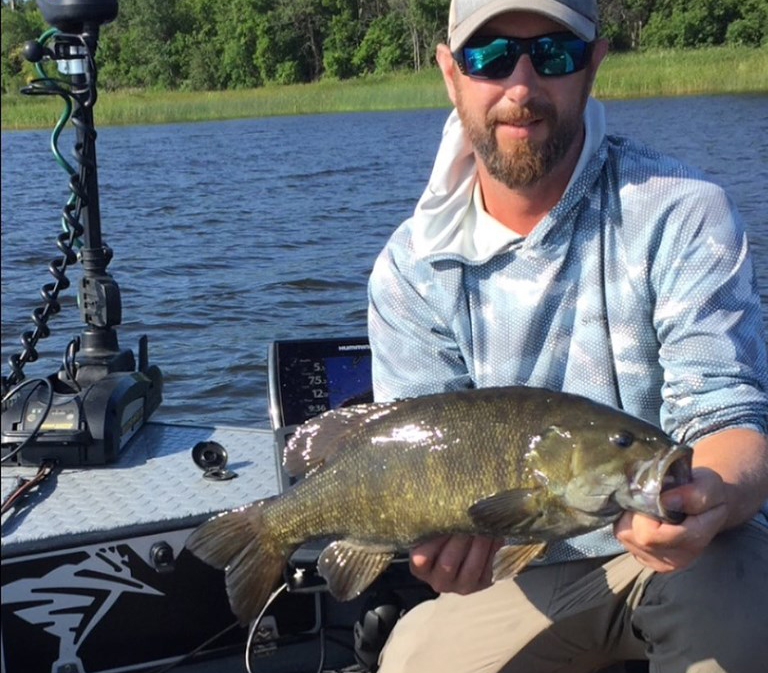 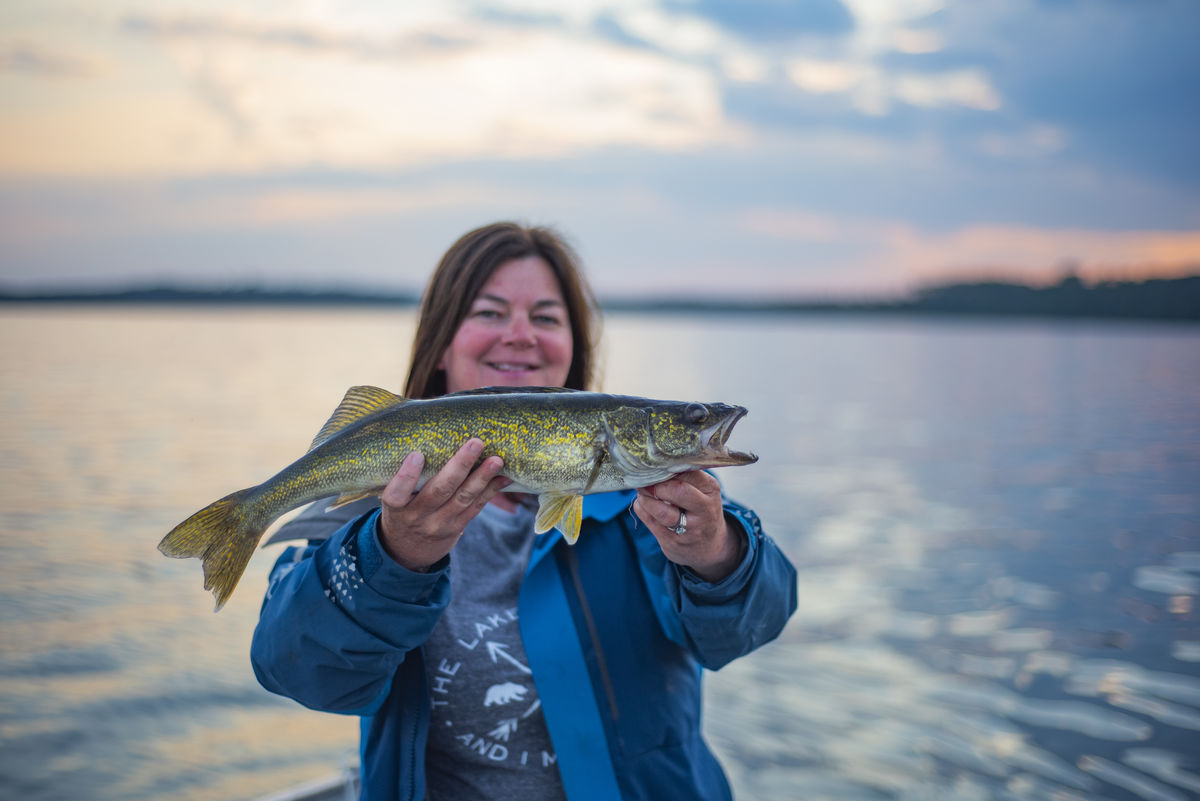 Similar to bass, you can hold smaller walleye vertically without causing any harm, but you certainly do NOT want to "lip" them as they have some impressive teeth.

Below, Jeff Gustafson explains how the gill plate hold on walleye whether horizontally or vertically helps with catch and release as well as making your photographs look better! 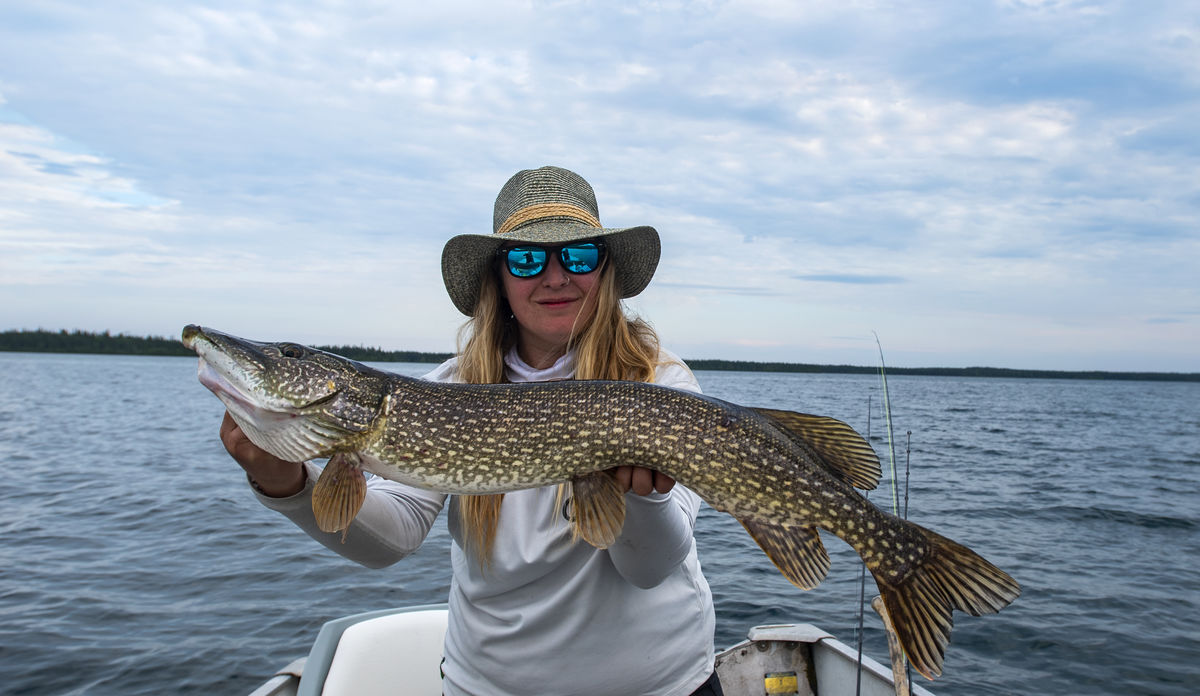 Perhaps the most intimidating of our fish species in Sunset Country is the Esox family of northern pike and muskie. It's important to understand how to handle pike because they are especially common in these waters and odds are you'll be unhooking a lot of them.

All fish deserve our respect, but perhaps the species requiring the most special care is the muskie. These fish grow LARGE. Which means they are especially subject to weight-bearing in the wrong places if held improperly. They may be the apex predator in the water, but when they are removed from their environment the saying "the bigger they are the harder they fall" is very much relevant.

The gill hold is very important to understand for holding pike and muskie. Not only will it protect the fish, but it'll also protect you and your hands. If done properly, no gloves are necessary.

Here are the steps to make it simple:

1. Following the gill line to the bottom of the pike or muskies head, slide your index finger inside and underneath the jaw of the fish (much like you watched in the walleye video above)

2. Once you know you're tight to the bottom of the fishes mouth and away from the gills, allow the rest of your fingers to slide in as well next to your index finger

3. Keeping your thumb outside of the mouth in the notch of the bottom jaw, you'll be able to clamp down onto your index and other fingers inside the mouth of the fish.

4. Once their head is securely in your hands, lift them out of the net and support them horizontally by securing your other hand under their belly like the photos above. 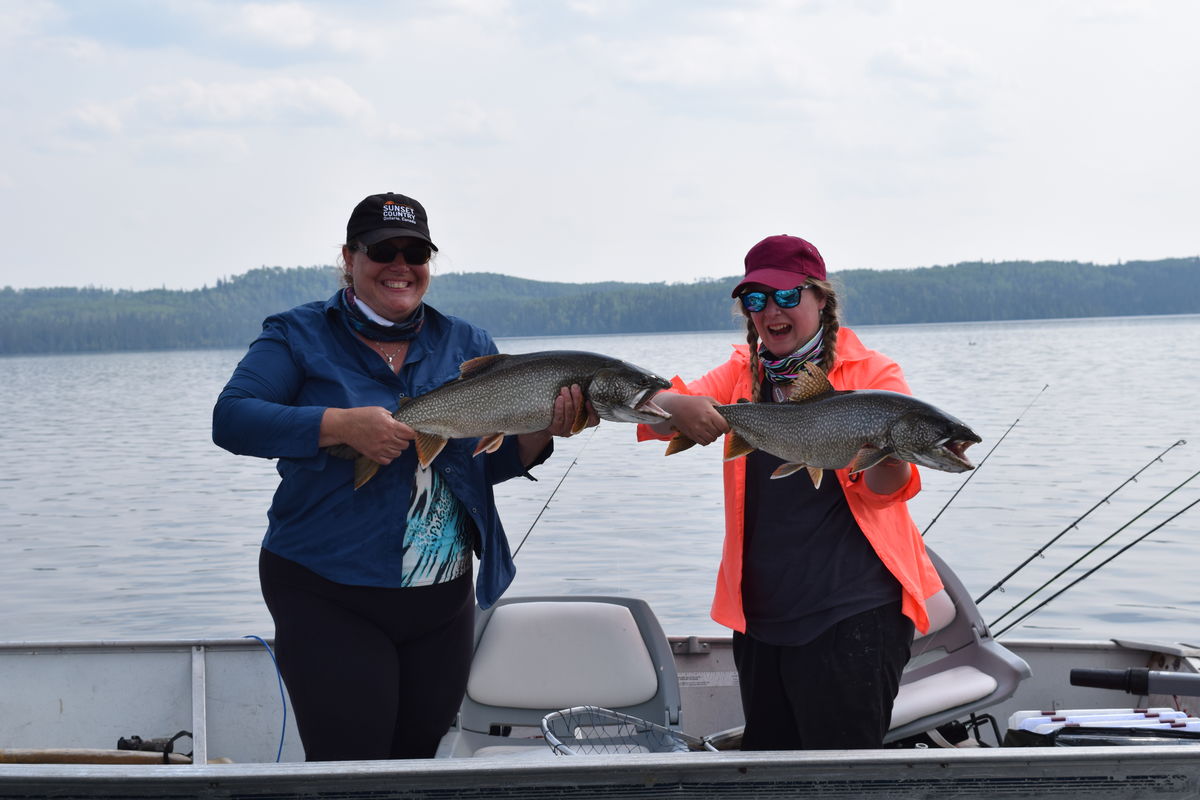 Depending on the trout's size and species, gill hold may or may not be acceptable. Large lake trout can be held by the gills with their weight supported, but a hold that will give you a more secure hold on their powerful tail may be mistaken for playing air guitar.

This "guitar hold" works for brook trout as well. Using your dominant hand (seems to work best for most) wrap your hand around their tail, with your other hand support the space between their pectoral (front) fins. Tucking your hands underneath will assure your fish looks great, but will also stop you from accidentally strangling the fish. The photo above shows both options for the non-dominant hand, the angler on the left is choosing to wrap her hands around, but keeping control of them not to choke or injure the fish. The angler on the right is tucking her hands below the fish, simply supporting the weight.

Like with all things learning, practice really does make perfect. You can't be expected to learn these perfectly the first time. The holds covered above are all focused on what will give you the most confidence, but you may find other proper ways to handle fish.

If you'd like to learn more about these holds, you could consider hiring an independent fishing guide for the day. Be clear with your intent to learn more, guides will be more than willing to help educate you on fish holds, tactics, techniques and even how to land them easier!

Here's more on why it's important to learn: Let's say a large fish is held vertically, that large fish has until this point lived its life suspended horizontally almost weightlessly in water. Being hoisted by its jaw or gills (which acts as lungs for the fish) puts a tremendous amount of pressure not only on those areas, but it's internal organs that have never felt gravity quite like this before. Larger fish held vertically poses a risk to their organs tearing from place and ultimately causing a delayed death after release.

If you don't know where to begin, you can search by the species listed above, or check our Accommodation Finder and use filters such as drive-in, fully guided fishing, wheelchair accessible, fly-in outposts, and more!

You can also order our FREE Travel Guide including a pull-out map of the region and our lodges here. Feel free to call us at the Sunset Country office 1-800-665-7567 as well.