WHAT IS A TIGER MUSKIE?

Tiger muskies are a hybrid species between a muskie and a northern pike. This hybrid is a result of a muskie and northern pike spawning in similar habitats at the same time as opposed to separately as most spawns occur.

Because these fish are both in the esox family, they are able to cross-breed creating the ever rare and beautiful, tiger muskie. The striped pattern is the most distinguishing feature.

Tiger muskies can be identified by their over-the-top colour pattern that is similar to a muskie in that they have a light background with dark vertical markings, but an exceptionally coloured barred variation of true muskie can also confuse anglers. Their tail (caudal fin) and the two sets of "paired fins" will be how you know for sure it is a tiger muskie. They will be rounded like that of a pike as opposed to in a point like on a muskie.

Compare the photos below and see if you can spot the differences. At the bottom of the article, there is also an infographic on muskies, northern pike and tiger muskies to compare notes to, including the three different colour variations of true muskies.

Below is a photo of a full muskie caught with Anderson's Lodge on Lac Seul. Note the pointed tail (caudal fin) and the two sets of paired fins.

And here is a photo of a full northern pike caught with Showalter's Fly-in Outposts where you can note the rounded caudal and both of the paired fins.

Below, is a tiger muskie caught with Sunset Country Adventures on the Indian Lake Chain.

HOW DOES IT HAPPEN?

While some reading this will recognize tiger muskies from stocked fisheries across the states, tiger muskies occur 100% naturally here in Sunset Country. A natural hybrid muskie is nothing short of an exciting catch. Although they are rare, they ARE caught here in Sunset Country often enough in one season to draw attention to them. Anywhere pike and muskies frequent the waters, there's a possibility of catching a tiger muskie.

During years where water temperatures rise faster than normal, there's a chance that muskie and pike spawning times will overlap. Whereby northern pike begin to spawn almost immediately after ice-out, muskies wait until the water is roughly 49 degrees. If temperatures rise fast enough after ice-out, instinct will force both species into the spawning grounds at the same time.

While either species would rather their own time in spawning grounds to avoid competition, water temperatures will ultimately be the determining factor.

If you were to catch a 40" tiger muskie, you can bet that fish is roughly 15 years of age which relatively young for a fish that size. Tiger muskies grow fast and are seemingly more durable than their full parent species.

Tiger muskies can tolerate warmer water better and grow at a faster rate than most pure muskie or pike.

Like other hybrid fish, tiger muskies are sterile and cannot reproduce. This is an upside to their short term life span, meaning they spend most of their time thinking about food. It's rare you'll find a tiger muskie that doesn't look well-fed. 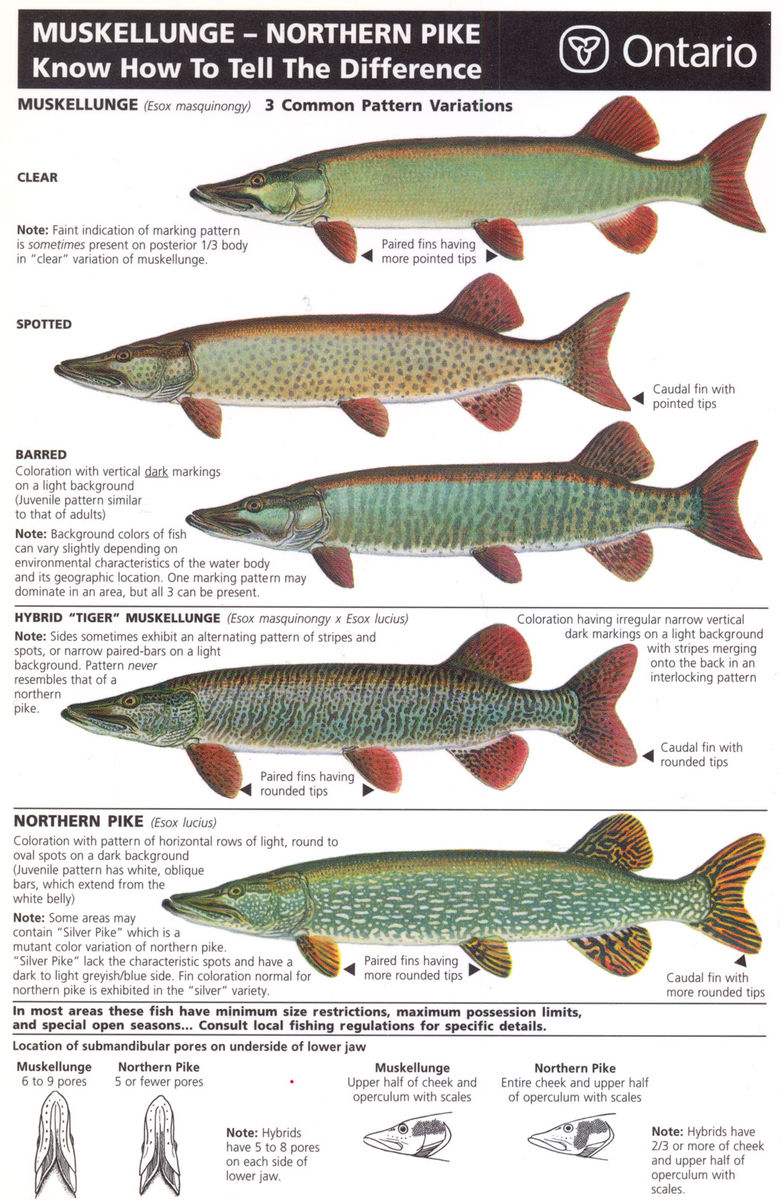 WHAT OTHER HYBRIDS ARE IN SUNSET COUNTRY?

One other example of hybrid fish in Sunset Country is splake, although any splake populations in Sunset Country are both stocked and unnatural. Splake is a mix between lake trout and speckled trout (brook trout). Stocked splake lakes offer great angling opportunities in put-and-take fisheries across the region. They grow fast and are heartier than brook trout, making them ideal for stocked lakes where brook trout failed to succeed.