It may already be February, but it's still not too late to book an ice fishing trip this March!

As the popularity of ice fishing has grown over the past decade so has the willingness of anglers to travel to top-notch destinations to catch more and larger fish. Ontario’s Sunset Country Region is one of those top-notch destinations because of the number of waters that offer easy access, great fishing and beautiful scenery.

While the early January timeframe is popular with lake trout anglers looking to score as the season opens January 1, when most people ask me “when is the best time to plan their trip” I usually recommend the mid to late March period because of the likelihood for nicer weather, longer days and the fishing is typically superb.

Walleye and pike both spawn shortly after ice out in shallow bays. Every year both species make predictable moves in March and stage just in front of these shallow bays while they wait for the ice to melt. They will even move into the shallow bays late in the ice season. While they are staging up they have a healthy appetite which is good for anglers. 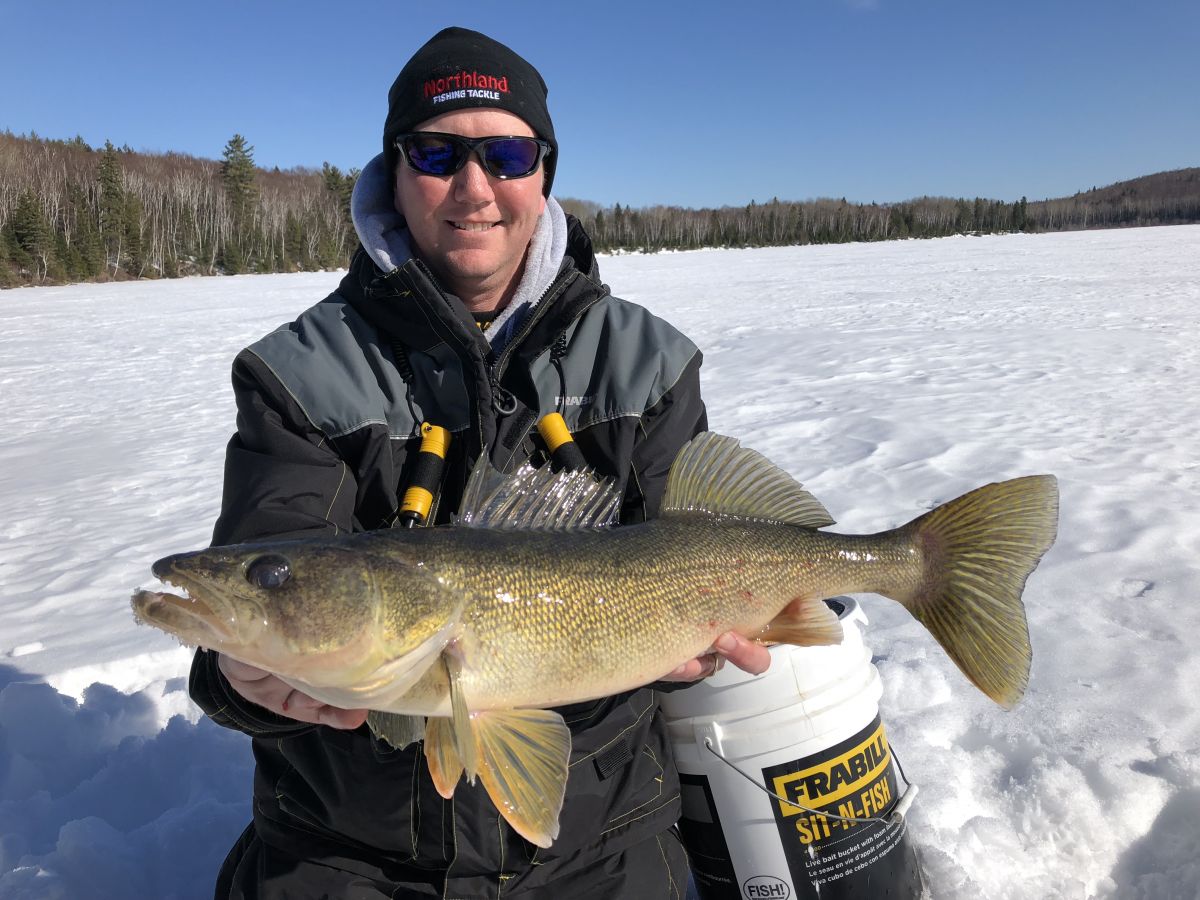 Some of my most memorable days on the ice have been when my friends and I have caught dozens of walleyes and pike out of the same holes. Not just your standard “eater” walleyes and pike but some of the biggest specimens of each species that I have ever had my hands on. All of these fish are chunky and healthy, weighing as much as they do all year.

It’s usually a 1-2 punch for us. Since we’re allowed to use two lines when ice fishing in Ontario, we’ll jig for walleyes then hang a large dead cisco or sucker minnow on a quick-strike rig, beneath a tip-up.

The pike rig I always use is a Northland Tackle Predator Rig. It has two treble hooks that hang the bait horizontally in a natural fashion. I like to put one hook in the head and one in the dorsal fin. In the past we have set up underwater cameras on these dead baits and most of the time pike will hit the bait from the side so they usually get the hooks in the corner of the mouth which is what we want. 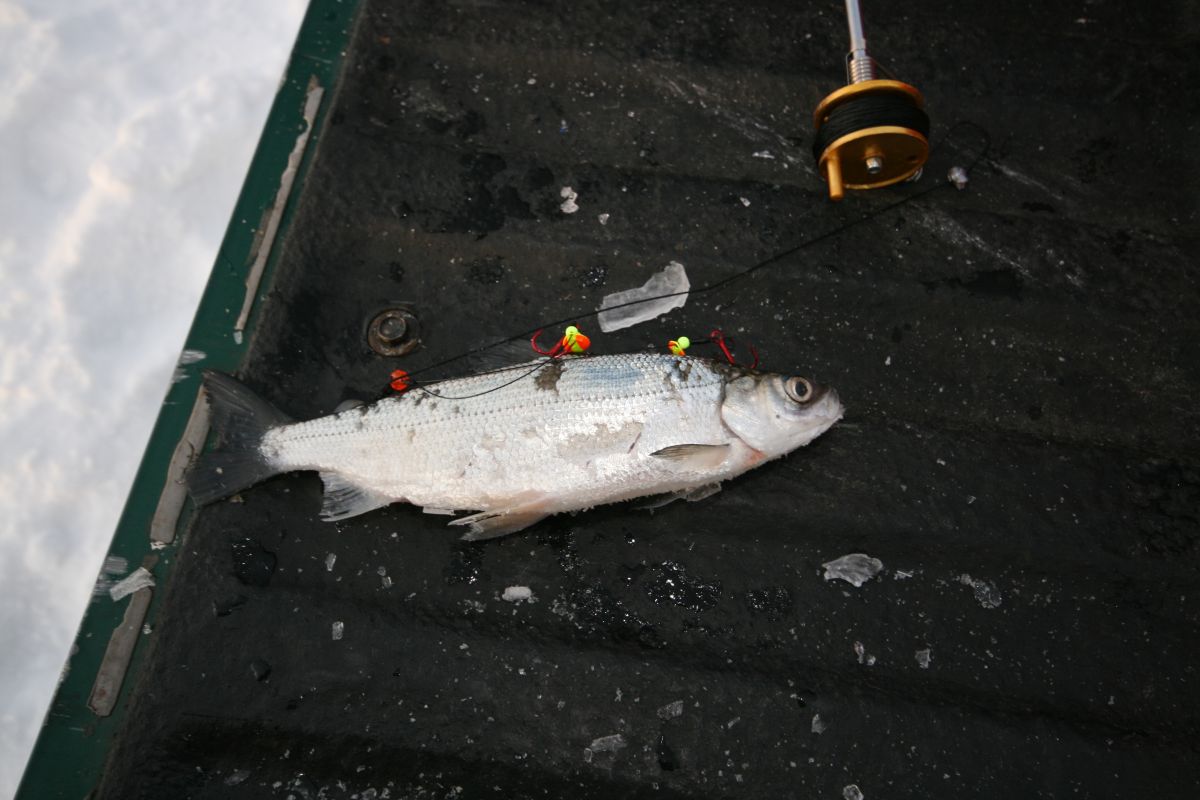 I like to set the bait a foot or two above the bottom. When the flag goes off, get to it and hit the fish with a sweeping set. You don’t need to let them swallow it, hit them quickly. If they swim off with the bait for too long the chance of them swallowing the bait increases, making it tough to extract the hooks.

The biggest pike I have ever had in my hands on have all come in March with this tactic. Often, we catch our own bait because it’s sometimes tough to find big baits you can buy.  We’ll run into ciscos chasing our trout baits while we jig so I always have a small crappie-sized spoon with me to drop down to the aggressive ciscos.

With walleyes, the depth of water we’re fishing varies from lake to lake. On some of the smaller, shallower inland lakes, I have caught them in five to eight feet of water, while out on Lake of the Woods, it could be 15-20’ of water. It’s all relative to the lake you’re fishing. Usually the first “drop” into deeper water coming out of the shallow spawning areas are the best spots.

I seldom use anything but a spoon tipped with a minnow head for walleyes but a jig tipped with a minnow works well to. Finding the fish is the most important thing, they are usually not to hard to catch. One thing I will tell you is walleye faithfully like the “prime time hour” just before sunset the best.

Crappies, lake trout, whitefish, burbot and perch all seem to amp up their activity in March when the sunlight starts to penetrate the ice as the snow melts off. Not only is the fishing usually better than any other time of the season, being on the ice on those nice March days is so enjoyable. 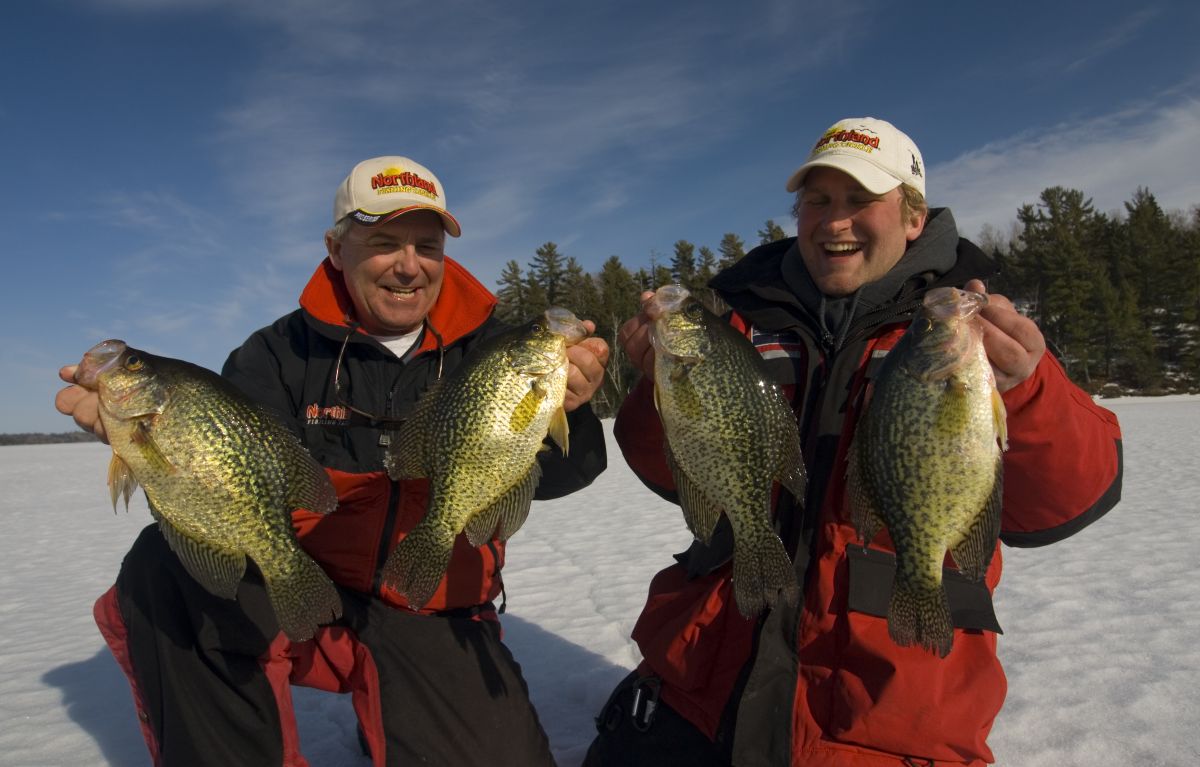 For anglers in other areas where seasons may be closed, you can come to Ontario where the seasons remain open for all species right through ice out. The walleye season closes on Apr 16 but most years the ice season is finished by then. Lake trout, crappie, pike, whitefish, perch, stocked trout and burbot are all wide open!

March is prime time for ice fishing in Sunset Country and several resorts around the region have accommodations available for you right through March. These folks can likely point you in the right direction on where to fish and how to get there as well. If not guide you completely. Come and have some fun!